Maria Montessori was born in Italy in 1870.  She was the daughter of educated, middle-class parents.  In 1896 she was one of the first women to graduate as a medical doctor from the University of Rome.  As a researcher at the University’s psychiatric clinic, she observed children suffering from various mental illnesses.

Dr Montessori recognised that additional research and work needed to be done to assist these children.  She researched the work of Seguin and Itard and developed her own theory.  Based on her ideas she created a number of teaching materials and a prepared environment for learning.  An environment which allowed for the individual child’s self-motivation and the full realisation of their potential. Her remarkable success with these children led her to examine the learning of all other children and in 1907 she started her first school, the Casa Dei Bambini in a poor part of Rome.

Rather than pursuing her career in medicine, Dr Montessori continued to be involved in education.  Her theory of education was published in The Montessori Method and the popularity of her method facilitated the growth of Montessori Schools in the United States and Europe.

Maria travelled around Europe and the United States lecturing on her theory of Education and when WWII broke out, she was forced to leave Italy.  For the duration of the war Dr Montessori remained in India.  In India she developed her idea around “Cosmic Education” and became a proponent of peace through education. After the war, Maria settled in Holland where she established the Association Montessori Internationale.

Maria Montessori was nominated multiple times for the Nobel Peace Prize.  She died at the age of 82 in Holland, where she is buried. 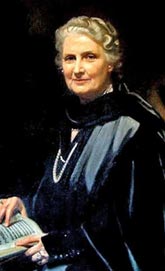 BOOK YOUR TOUR
ENROL AT OUR SCHOOL

This may take an hour or two so please book your time accordingly.
We will get in contact with you with a date and time. Thank You.